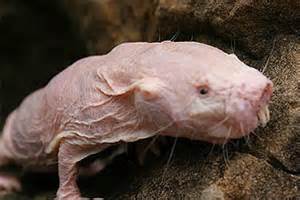 12 Naked Mole Rat Facts That Will Amaze You

1. Even though they are called naked ‘mole’ rats, they are not moles. Nor are they rats, actually. They are more closely related to porcupines and guinea pigs.

2. They are naked, however, except for a few scraggly hairs and whiskers for feeling its way around underground.
Naked Mole Rat 3
Naked Mole Rat

3. The naked mole rat is the only mammal whose body temperature changes according to the external temperature.

4. The mole rat does not feel pain on its skin. The wrinkled skin is yellow or pink.

5. The mole rat has large buck teeth that are designed for digging. It has an interesting ability to move its incisor teeth independently of each other.

6. The mole rat is only one of two mammal species that are eusocial, meaning that they live in a hierarchy society. Similar to ants, wasps, bees and termites, there is a queen mole rat, soldiers and workers.

7. Only one female reproduces, along with the help of one to three males. The queen has had to fight her way to the top, and the worker mole rats are sterile, tending to the burrow, gathering food and defending the group from intruders.

8. Naked mole rats live almost their entire lives in darkness underground. As a result, the naked mole rat’s eyes are quite small, with very little sight.

9. A colony of naked mole rats can consist of 20 to 300 individuals. Their underground territory can be as large as 6 football fields.

10. The burrow has individual chambers that serve different purposes, such as nesting, raising young, eating and, waste disposal.

11. The naked mole rats are the longest-lived rodents, with a lifespan of up to 30 years.

12. Naked mole rats appear to be resistant to cancer.

Universal Pest & Termite Inc. - We specialize in pest control for ants, termites, spiders and rodents (Mice | Rats). We also offer moisture control, structural repairs, home insulation services and air duct cleaning. Universal Pest & Termite specializes in termite inspections as well as termite protection and termite warranties. All pest and termite services come with our No-Hassle guarantee. If the bugs come back, so do we. Free of charge.