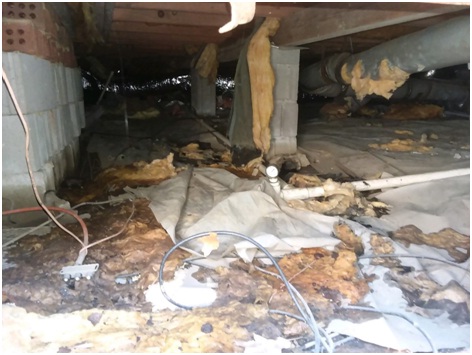 How does the dirty air from my crawl space enter my house?

Do you know what your crawl space looks like? Moisture, mold, fungi, growing bacteria, and other factors are seen here could be causing bad odors in your home, cracks in drywall, uneven flooring, or even giving your family members allergies or asthma symptoms. If the crawl space in your home looks like those pictured above, contact us now for a free estimate!

The two main points of entry are leaks in the HVAC system and air penetrating the subflooring.  Unless the floor between the house and the crawl space is completely sealed with polyurethane foam, dirty air will make its way into the house.  There is no escaping it.

Dirty Crawlspace
Generally, the dirt in a crawl space is drier than the dirt around the foundation. This results in moisture wicking into the crawl space from the dirt outside. Once inside the crawl space, the moisture evaporates into the air and the water vapor moves up and settles on ductwork, floor joists, subfloor, and/or floor insulation.

Previously, the tactic was to add vents to a crawl space, which were supposed to allow the moisture to dissipate. These vented crawl spaces, instead of becoming less damp, end up being more wet for several reasons. This can cause termite infestations or fungi.

Through a process called the stack effect, a house’s natural tendency is to draw air in from the crawl space and lower levels, and then upward into the living spaces. This means that instead of letting moist air out, a house sucks more moist air in.

What is the stack effect? The stack effect is when warm air moves upwards in a house. In the summer and winter, warm air rises because it is lighter that cold air. Eventually it escapes from the upper levels of our home. 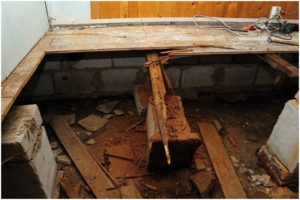 Air Ducts in the Crawl Space

If the ducting for your HVAC system is running through the crawl space, it acts as a highway, carrying all the dust, moisture, rodent droppings, and chemicals from the crawl space directly into your living space and your air.

Ducts that are well-sealed shouldn’t be an issue, but the reality is that ducts in the crawl space are usually poorly installed and unsealed. Ducts carrying cold air through a humid crawl space can mean condensation problems. Condensation is the leading cause of brown-rot.

Supply ducts blow the air that you pay to heat and cool the rooms in your home. As this pressurized air passes the joint in the ducts, air leaks out. It is estimated that 2% of the air leaks out at each joint. This causes the living spaces to be depressurized and the crawl space to become more pressurized. This pushes the moldy air up faster than it would go otherwise. 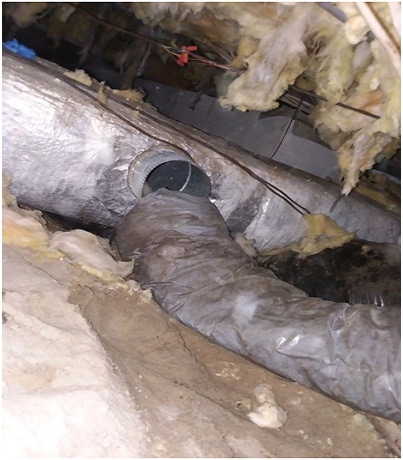 What Is Duct Sanitation & Why Is Air Duct Sanitizing Important?

Sanitation involves applying an antimicrobial chemical to kill bacteria and/or airborne contaminants and to minimize the chance of re-contamination. However, unlike spraying your kitchen counter or cleaning your bathroom sink, duct sanitation must be done with care and only when necessary to kill excessive microbial growth. At Universal Duct Cleaning™, our technicians take the utmost care to sanitize only in safe and effective ways. Some of these include:

Recommending sanitation only when mechanical cleaning is insufficient to prevent bacteria or airborne contaminants from becoming a health hazard (e.g. after flood or sewage contamination, vermin infestations, etc.) 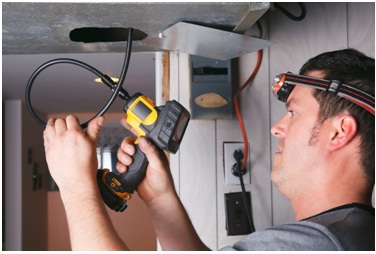 It was once thought that crawl spaces should be vented to allow moisture to move out of the area. However, these vents allow just as much moisture to move in, and its presence is detrimental to your home. Therefore, we seal the entire space to keep air and heat from moving freely through your crawl space.

The exchange of air from your attic to your living space is minimal, thanks to roof ventilation and attic insulation, a properly roofed home will have an upward draw. Things are different on a crawl space, this means you are drawing air up from the crawl space in to the living space, at a rate of up to 50%.

Save MONEY! You may be able to reduce energy costs by up to 15% annually with a crawl space encapsulation from Universal Pest & Termite. Your HVAC system’s efficiency can be reduced severely by the open foundation vents found in the home. In winter and summer, the seasonal air travels into the home. Your HVAC must work harder to condition the air to your comfort level. 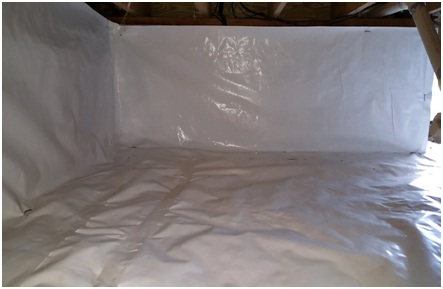 Why do you need a Dehumidifier in your crawl space?

Dehumidifiers for Pest Control: A rise in the pest population means that you need to be more careful about pests’ intrusions. If your home has been through a hurricane and experienced moisture problems that presents further risks. Excess moisture inside your home, especially if left unattended, becomes quite attractive to moisture loving pests like termites. Keep in mind that moisture may be hidden in areas like the crawl space, attic, or basement. If there is moisture, try to take care of it as soon as possible. This will help prevent pests, as well as mold, and fungi.

Dehumidifiers for Moisture Control: Another area of your home that can be a massive cause of moisture problems is your crawl space. If left unattended, your crawl space may be home to issues such as standing water, pests, or mold. If you do notice signs of high humidity and moisture, it’s important to take steps to control the humidity in the area. For instance, enclosing your crawl space and installing a dehumidifier will allow you to maintain a consistent humidity level and prevent many future issues.

The Benefits of Installing a dehumidifier Under Your Home. 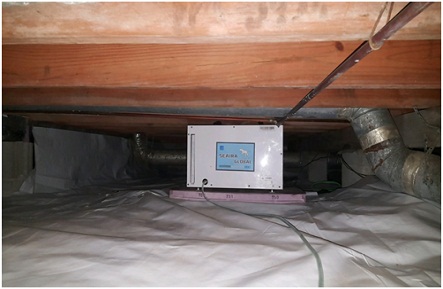 “Universal Pest & Termite installed a complete crawl space micro-encapsulation system under our home. It immediately made a difference with the musty smells we were getting in our bedroom and kitchen. We checked out local pest control reviews and found Universal Pest.”
-Maddie K Chesapeake (Virginia)

“We contacted several termite companies in Virginia Beach after discovering active termites in our home. Josh with Universal Pest & Termite was by far the best inspector we met with. In addition, Universal offered the best termite program for our budget.”
-Merrideth G. Virginia Beach (Virginia)

“After trying other moisture control companies for our fungi and moisture problem, we contacted Universal Pest & Termite. They made sure all of our questions were answered and eliminated our moisture problem as well as repairing the existing moisture damage.”
-David C. Virginia Beach (Virginia)

Universal Pest & Termite Inc. – We specialize in pest control for ants, termites, spiders and rodents (Mice | Rats). We also offer moisture control, structural repairs, home insulation services and air duct cleaning. Universal Pest & Termite specializes in termite inspections as well as termite protection and termite warranties. All pest and termite services come with our No-Hassle guarantee. If the bugs come back, so do we. Free of charge.

Universal Pest & Termite Inc. - We specialize in pest control for ants, termites, spiders and rodents (Mice | Rats ). We also offer moisture control, structural repairs, home insulation services and air duct cleaning. Universal Pest & Termite specializes in termite inspections as well as termite protection and termite warranties. All pest and termite services come with our No-Hassle guarantee. If the bugs come back, so do we. Free of charge.